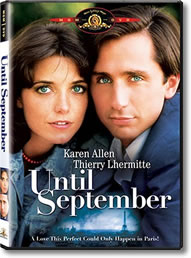 Janice wrote the original screenplay for this feature film produced by MGM and directed by Richard Marquand.

“A love story about two strong-willed individuals, the film stars Karen Allen as Mo, an American tourist stranded in Paris for a few weeks. Crashing in a friend’s plush apartment, Mo meets her handsome neighbor, Xavier, played by Thierry Lhermitte, a married banker whose family awaits him elsewhere on holiday. The two initiate a romance that finds them butting heads twice as often as kissing, with Xavier frequently flogging his overconfidence as a man of the world to a distinctly unimpressed, far from naïve Mo. The more Xavier’s façade crumbles, the nicer and more real he becomes, until he has to face the fact that his life of marital convenience and mistresses is a charade. As a peek into an affair that blossoms not because of Paris’s effect on lovers but because of the gift of honesty, Until September is somewhat unusual.”

John Barry wrote a wonderfully romantic score for the film. You can listen to the theme song here. The video is a compilation of scenes from the film as well as still shots from the set. The man in the shot with Karen Allen pointing to the camera is the director, Richard Marquand.

Here’s what viewers are saying about Until September:
“His eyes!”
“Still wonderful after all these years”
“One of my all time favorite love stories”
“Best romantic film ever”
“My favorite movie of all time”
“Wonderful unforgettable film”
“The best sappy love story I’ve seen”
“Fantasy romance with fascinating Frenchman fulfilled”
“Absolutely wonderful…you must see it again and again”